A Chance Encounter with Matthew Rhys While Shooting The Americans 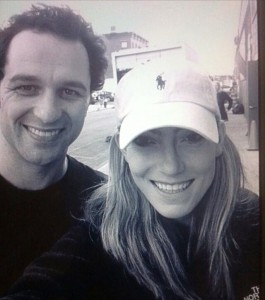 I knew that The Americans was filming in studio because of olv. So I had just gotten off on Easter Break and I figured I’d go running and check out if they were actually filming. I was walking down the street in my running gear when someone was crossing the road– turns out it was Noah Emmerich (Stan Beeman). He’s extremely tall and very handsome which should surprise no one. It took me a moment to realize who he was. As soon as I realized, I stopped in my tracks and my eyes widened. He smiled at me, I smiled back and said,

I kept walking. I had no sooner reached the corner where filming was set up when Matthew Rhys walked down the street past me! I stopped and looked at him, fully registering the scene, but I was careful not to give the same reaction I blurted out to Mr. Emmerich. I saw Matthew coming from a distance down the street, so I looked at him as if I had no clue who he was, like he was just anybody on the street.

He was so handsome, and I felt like jumping up and down but I just watched him go down the street. This worked in my favor. He made eye contact with me and checked me out as he went. I was in leggings, a pale pink hat, and sneakers. I think of myself as a pretty cute girl so I feel he was noticing me as he passed by.

He kicked a can twice before entering the cafeteria setup, and looked back at me and smiled before he went inside. For some reason I found that really cute and goofy. I think he assumed I worked on set. I must emphasize how amazing the set crew was! I stayed out the way and didn’t bother anyone, and the lighting technicians/personal assistants/ directors/ were incredibly kind, helpful and accommodating. The lighting director offered to get me food, and we ended up talking about our jobs and hanging out just a little bit.

After a little while spent waiting for people to come out, Noah Emmerich emerged again. I smiled at him, said [quote]”Thanks again for being so nice!” and he said “oh, any time.”[/quote]

Then he took a picture with me and asked me name and shook my hand. So handsome. After that, Adam Arkin (Chicago Hope, director, etc) walked out. He smiled at me and said,

I smiled back and replied,

He winked and continued walking. One of the set crew guys noticed me waiting and said,

I nodded, feeling sheepish. He continued,

The guy got out of his truck and said,

But he was already walking in. About ten minutes later, Matthew Rhys and the actress who plays Sandra Beeman walked out together. I summoned all my courage and said,

He turned around, recognized me, and smiled.

[quote]”I was wondering, would you be willing to take a photo with me please?”[/quote]

In his delicious welsh accent he responded,

And ran over to me with a handsome smile on his face. I stammered out that I had felt too shy to ask him the previous three times he had walked past me and he said,

With that he put his arm around me and leaned in close to me, and we smiled for the photo. He smelled amazing and his hand lingered on my shoulder. I just about sprinted out of there afterward. As I left I saw him tossing a football around with some personal assistants. If I saw him again I would try to summon some courage and offer to buy him a drink some time.

[styled_box title=”Want to share your story?” color=”gray”]If you have a story about meeting one of the cast members of The Americans, leave a message in the comments below and we will contact you about sharing your story![/styled_box]

At the JFK Library: How to defuse a nuclear showdown