I am not sure that it is fair to call The Americans a “drama”. Sure it is dramatic, yet “drama” doesn’t seem to be the best way to describe it. Maybe we should call it an anxiety show.

In Clark’s Place, the anxiety level builds to amazing heights for almost all of the main characters. 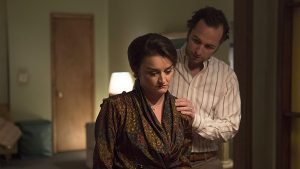 Clark’s Place opens with Phillip (as Clark) coming by to see Martha, and trying to explain why he was unreachable during last episode. (I guess it wouldn’t be a good idea to tell her you were self quarantined due to possible exposure to stolen bio-weapons.) Martha tells Clark that the FBI has noticed the counters are off on the copy machine. She also mentioned that Agent Aderholt asked her to dinner. They may be on to her.

Clark givers her the number for the center and tells her the woman who answers that number can get in touch with him anytime. Martha has to memorize the number, and only call it from a payphone.

Phillip tells Elizabeth that he thinks the FBI is on to Martha. Elizabeth suggests they have Hans keep an eye on her and see if she is being followed (by anyone else…). When Martha is on her way to Clark’s Place, Hans thinks he sees a car following her. He calls Phillip to warn him, and Phillip makes a quick escape.

Later, Phillip and Elizabeth tell Gabriel that they think the Feds are onto Martha. Gabriel stresses how important the information Martha gets for them is, and suggests that they may be being paranoid. Gabriel senses Phillips desire to protect Martha, but knows that “doing something” may expose her even more. “It’s excruciating not to make a move when things are uncertain. We are people of action.” Gabriel says. But at this point in the episode, things are uncertain. We (the audience) know that Martha is being watched, but Phillip is just guessing. And for that matter, Stan and Aderholt are just guessing that Martha may be up to something. It is best to let them look, and find (hopefully) nothing. This isn’t the time to show your hand.

Back in the USSR 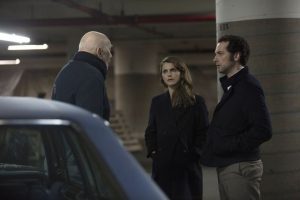 Oleg finds out that Nina has been executed. Costa Ronin plays the reaction with a stoic heartbreak that befits Oleg’s communist upbringing. He tells his father that he shouldn’t have expected anything different. After all, he is the only eurocrat in Russia that couldn’t get his son out of Afghanistan. This causes the senior Burov to go into a rant about how the country has changed. How he lost 4 brothers in WWII, but he came home a hero. Now he can’t even mention the place his son died fighting in. He tells Oleg to go back to America.

When Oleg returns to America, everyone at the Residentura is offering condolences for the loss of his brother. But that isn’t the loss that is bothering Oleg. He goes to Arkady’s office and tells him that Nina was executed. He doesn’t get the response he wanted. Arkady tells him she had chance after chance and she threw it away.

Oleg then meets with Stan in a dark alley. He tells Stan about Nina’s fate. Stan takes this hard. Stan has always seemed the “bumbling cop” of The Americans to me. He is always close, but never actually gets them. He is quick to put a tail on Martha because he suspects, but they knew that could happen and already had things in place to cover it. Imagine if Stan put a tail on Phillip when he though Phillip was banging his ex-wife… what a different story this would be.

Stan tells us that they told him when he joined counter intelligence that “this could happen”. We can tell Nina was his first lost.

The Godless Commies and Pastor Tim

Paige comes in and wakes Elizabeth from a deep sleep. Elizabeth is startled. Paige is still having trouble coming to terms with her parents being Soviet spies. She has a lot of questions. Elizabeth tries to reassure her, but tells her that they tried to be honest with her, and that hasn’t worked out so well. Maybe this is enough for now. They will tell her more when she has dealt with what they have already told her.

On their way home, Phillip and Elizabeth drop the Priest off, and as he is leaving, Phillip asks Elizabeth “So do you think that guy is really a priest?” “I have no idea” she responds.

Phillip and Elizabeth tell Paige that she needs to make up with Pastor Tim. “He cares about you” they tell her. She doesn’t seem to like the conversation, and goes to bed.

Paige does go to see Pastor Tim. “My parents told me I should forgive you” she tells him. “Why do you think they did that?” he asks. “Think think you’re a good guy” she answers. Paige may make a good spy yet. 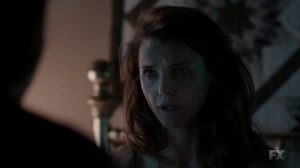 Anxiety, tension, pressure. Clark’s Place was an episode of The Americans that nailed these concepts. The Jennings are being squeezed from all directions. (with the exception of Henry who is oblivious to everything… Is that kid smoking weed?)

The fate of Nina has put some pressure onto Stan. Not necessarily external pressure, but he is still feeling it. He feels responsible for Nina’s death, and someone has to pay.

Oleg is also feeling the pressure from Nina’s death. A pressure that may be causing him to question his allegiances. Could Oleg’s doubts about his patriotism, and association with Stan be what finally blows the Jennings Cover?

Or could it be Martha. Martha is feeling the pressure. She wasn’t trained for espionage. She is just a love struck secretary who got in over her head. If there is a weak link in the Jennings chain, it is Martha.

Only 5 episodes into the season, and the pressure cooker is boiling. When will it blow?