The past few episodes of The Americans season 4 have been extremely tense. There has barely been any let up of the tension level, and most episodes have been “edge of your seat” the whole way through. Under that type of pressure, something had to give, and in episode 8, The Magic of David Copperfield V: The Statue of Liberty Disappears, it did.

Other then the absurdly long title (which I am currently trying to figure out how to fit into the photo that is at the top of this article), there was little humor in this episode. There was also far less stress. 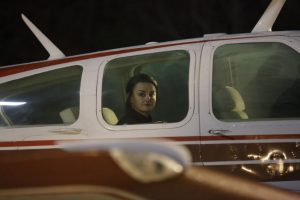 The episode opens on a melancholy note as Phillip accompanies Martha to her flight to Russia. The early morning wake up, the lone plane in the field, the odd quiet… all of these lend to the feeling of loneliness and despair that both Phillip and Martha are feeling as Martha fly’s away, out of Phillips life forever.

Upon returning home, Phillip informs his family that the “lost a client” so he would be spending a lot more time at home, and wouldn’t be sleeping away a few times a week. It seems Paige doesn’t like the sound of “lost a client”.

Phillip is visibly depressed over the loss of Martha as he sulks on the couch reading an EST book. Elizabeth show her jealous side a bit, and is having trouble dealing with Phillips attachment to their “agent”. But like any good commie, she busy’s herself with work, and heads off to the movies with her Korean friend (that we are still not sure why she is working…). The see Tender Mercy’s, and then sneak in to see the Outsiders… oh Pony Boy… (I remember sneaking into a second movie at the theater when I was a kid. Do people still do that, or was that an 80’s thing?) 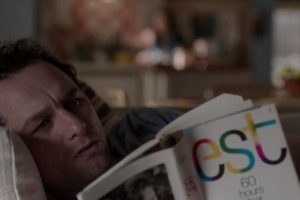 Stan comes by the house to get some beer (because the FBI agent can’t figure out that his kid and the commie kids next door are stealing all of his… or can he? Maybe that is why he came to take Phillips beer… does he know it was Paige and Henry drinking his beer?) Stan spills the beans about an “emergency” that he has had down at work. This clues Phillip into the fact that the FBI were on to Martha.

Elizabeth goes to an EST seminar. I think she is trying to understand Phillip, but she just doesn’t. She tells Phillip she went, and when he asks her what she thought of it she tells him it is some wicked capitalist money making scheme. She is probably right, but this just makes Phillip more upset, and they have an argument. He accuses her of not understanding what he is going through and she brings up Gregory (from season 1). It looks like the Jennings are headed for a divorce.

Their argument is interrupted by a phone call. They have to meet with Gabriel. When they arrive, Gabriel tells them that Martha is in Cuba, and will be in Prague by morning. Elizabeth tells Gabriel that she received a message from Lisa who wants to meet earlier then usual.

Gabriel can sense something is wrong, but neither Phillip or Elizabeth want to talk about it. 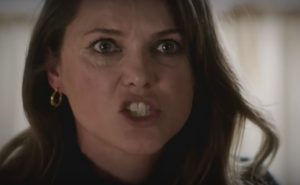 The next day, Paige skips out on bible study, and Elizabeth flips out on her. (like, veins popping out of her forehead type flips out). She tells Paige that she will not miss bible study, she will not miss church, she will find other things to volunteer for at church, not a day will go by that she doesn’t see Pastor Tim. Then she will come back and report to Elizabeth and Phillip what Pastor tim did, said, how he felt, etc.

Elizabeth lays it down. Paige almost breaks down in tears from the ass chewing she receives.

Stan sees agent Gaad waiting at the elevator and goes to talk with him. Agent Gaad informs Stan that he is on his way up to the bosses office and he will likely be fired. Stan tries to tell him that maybe he isn’t going to be fired, but Gaad knows the drill.

Elizabeth meets up with Lisa. Things aren’t going so good with her since we last saw her in season 3… Lisa is back on the bottle, and her boyfriend took all the money that Elizabeth has been giving her and moved to Florida with another woman. Lisa says the only thing left to do is to go to the police and come clean about what she has been doing. This doesn’t go over that well, and Elizabeth busts a bottle over her head. We don’t see it happen, but we assume Elizabeth kills Lisa.

Phillip is with Gabriel when Elizabeth walks in. She only says “Lisa’s Done too”.

Gabriel tells them that he is going to have the center lay off of them for a while. They will maintain current operations, but no new ones. It will almost be a vacation. As they leave, Phillip tells Elizabeth “So I guess we’re going to be travel agents now”. Elizabeth suggests taking the kids to EPCOT (finally). They head home and watch David Copperfield make the statue of liberty disappear. I remember watching that live when I was Henry’s age. I don’t remember David Copperfield dressing that funny… but then again, it probably just didn’t look funny to us at the time. 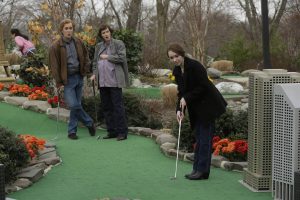 Then we get the “7 months later” cut with Paige playing miniature golf with Pastor Tim and his wife, then to Phillip and Elizabeth playing hockey in the driveway with Henry.

Stan stops by to visit (former) agent Gaad. Glad asks how his replacement is doing, and they joke about him for a moment. Gaad tells Stan his feelings about Stan’s dealings with Oleg. We cut back from that to Paige arriving at home. Elizabeth and Phillip follow Paige inside and as she is getting ready to walk up the stairs, Phillip calls her name. Paige stops at the bottom of the stairs and gives her report on what Pastor Tim and his wife said and did as we hear Gaad in voice over say “You can’t loose sight of who these people are”.

Overall, this wasn’t the most exciting episode of The Americans Season 4. This was actually kinda dull compared to the rest of the season. But it was a good release. It wrapped up multiple storylines, and calmed us down a bit after the hi stress of the previous several episodes. This episode wouldn’t be a good place to start watching The Americans, but if you have been watching all season, this was an episode you needed.