Some shows on TV can be like a rollercoaster. They have the stressful parts where you climb up the peak, knowing the fall is coming. They have the adrenaline rush where you go over the peak and fly down the other side, they have the fun, easy parts as you whip along heading to that next climb. The Rat, the 6th episode of The Americans 4th season is that climb to the top… the whole episode.

To be fair, there is that one scene, where Elizabeth is cooking Korean food for Paige and Henry, that is more like the fun ride. But the rest of the episode is a white knuckle, terror inducing climb. Something bad is about to happen… you just feel it… all the way through the episode. 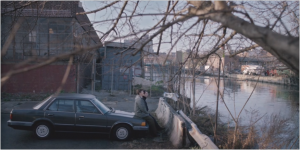 From the episode opening, we see Martha getting ready for work. She stops to take the gun out of her dresser and puts it in her person. We know things are about to go wrong. At the FBI office, Stan and Aderholt are digging ever deeper into Martha’s past, and things are starting to look suspicious.

Phillip meets with William again to try to talk him into getting more Glanders. William, in his oh so special way, tells Phillip that he can’t get more Glanders, but he might be able to get something else. Without going into details, Phillip tells William about the “agent” he is running, and how he wants to pull her out. On Martha’s way home from work, Phillip does just that, he pulls her out.

Phillip takes Martha to a safe house where Gabriel meets them. Phillip then has to explain that Martha has seen him without his disguise (he should have said she ripped the wig off during sex…). Gabriel is, understandably, upset. Elizabeth shows up (in disguise) and sees that Phillip is not in disguise. He has to tell her that Martha has seen him out of disguise as well… she is also upset. 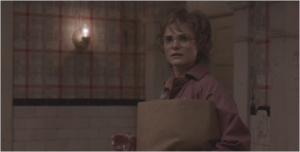 Phillip stays the night with Martha, and Elizabeth goes home to make that Korean food for Paige and Henry. The next morning, Martha calls in sick for work, and Stan and Aderholt really get suspicious. They call her house to check up on her, and when no one answers, they pay her a house call. When she isn’t there, they check Clark’s apartment.

If they didn’t know Martha was “bad” before, they do now.

Gabriel tells Phillip that he has to go meet with William. Phillip doesn’t want to leave Martha, but Gabriel insists. Phillip goes to tell Martha he has to leave for a bit, but she is passed out on valium. Phillip goes through her purse, and finds her gun. He takes it.

Back at the Residentura, Arkady informs Oleg that they need to extract someone to Moscow.

At this point I am wondering why no one has even suggested killing Martha. Realistically, she is not a Soviet citizen. She can ID a couple undercover spies. She has no more useful information. It seems the smart thing for the KGB to do would be to kill her, and dispose of the body. When Phillip gets back from meeting William, Gabriel could just say “Our people came and got Martha, she is on her way to Moscow, she will be treated well when she arrives”. It would save lots of time and money, plus it would eliminate a lot of risk. I know they aren’t going to do it (because it doesn’t make for good TV), but it should have been discussed. 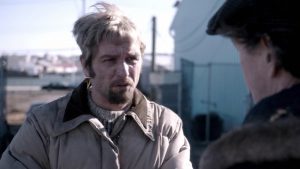 Back at the FBI offices, Stan and Aderholt tell Gaad about their suspicions of Martha. They give him a run down of their evidence, and he agrees.

Phillip and Elizabeth do a huge production disguise number to meet with William (who isn’t wearing a disguise). William brought Phillip a dead rat in a jar. He tells Phillip that he couldn’t get any pure samples, but he was able to get a rat that had been exposed to the contagion and died. The Soviet scientists should be able to extract the contagion from it.

And all this time we thought the rat in the title of the episode was about Martha… tricky. 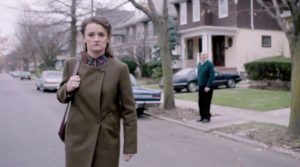 Speaking of Martha, she wakes up to discover Clark (Phillip) missing. Gabriel tells her that he will be back soon, but she is not dealing with this whole “I was duped into working for the KGB” thing very well. She tries to leave, and Gabriel tries to get her back into the house. She threatens to start screaming about him being KGB.

Again, this seems like a good time for the KGB to kill her. Maybe they will in next weeks episode.

The Rat really did start high tension, and carry that white knuckle, nail bitting, edge of your seat, momentum through the entire episode. As I mentioned, there was only one scene that wasn’t full on stress inducing, and that scene was probably added just to make sure the audience remembered to breathe. This is really turning into an incredible season of The Americans with great writing and top notch performances.