The Americans: A Roy Rogers in Franconia | S4-E12

With only 2 episodes left in season 4, A Roy Rogers in Franconia raises the tensions to a boiling point as everything seems to coming together in a perfect storm that may blow Phillip and Elizabeths cover.

The 12th episode of season 4 of The Americans picks up immediately following the events of the previous episode. Elizabeth and Paige return from almost being mugged, and the Jennings adults have to deal with Paige being upset over having watched her mom kill someone. I know, thematically, this makes for good tv, but I can’t imagine anyone in real life not being happy that her mom just killed the guy that may have raped her otherwise. 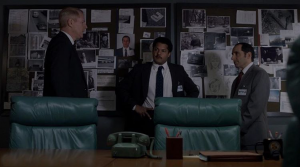 Phillip has to go meet Crandall and give him the access code for the bio weapon. It’s been a long, hard road getting these codes. But Crandall doesn’t seem to care to much about that. He thinks this weapon is to dangerous for the Soviets and therefore refuses to steal it.

Meanwhile, Agent Aderholt is digging into the whereabouts of everyones favorite mail robot. He finds a bug inside of it, but decides to leave it in place so they can set up a sting. 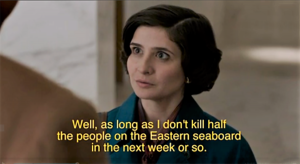 Tatiana tells Oleg that she has gotten a promotion and is being transferred to Africa, as long as her current operation goes well. She tells him that she might be able to get him transferred there as well. Oleg says he needs to think about it. It seems he can stay in America, where the FBI wants to blackmail him, go to Africa where is girlfriend will be his boss, or watt out her operation so that she has to stay in America… or maybe so he can get her promotion… or maybe because he doesn’t think the Soviets should have this powerful of a bio weapon either. Or maybe he feels he owes Stan something. I don’t know what Oleg’s motivation is, but he tells Stan the KGB has someone inside a private company doing bioweapon research for the US.

Gabriel, Phillip and Crandall have a meeting and Gabriel tells Crandall that he gets this one last sample, and they will take him back to Russia with hero’s honors. There was something threatening about Gabriel’s manner, and I don’t know if I trust him.

Paige makes out with Mathew (who she has been “spying on” for her mom. Phillip and Elizabeth ask Paige about her relationship with Matthew, and in one of the oddest forms of parenting I’ve ever seen on tv, basically tell Paige that she doesn’t need to run a honeypot on Matthew for them… Paige flips out, and demands to know what operation they are running… and they actually tell her. Let’s hope she doesn’t let that slider to her new boyfriend… Stan (the FBI agent’s) son.

Meanwhile, Stan and his team figure out that Crandall is the spy. Will Phillip get the bio weapon and Crandall out of the country without being seen by Stan or one of his people? Will Paige spill the beans (again)? One episode remains in season 4…