Remember Anna Chapman in the headlines three years ago? She was the arrested – along with 9 others – on suspicion she was working as a spy for the Russian government.

Perhaps you remember this FBI undercover video, showing Anna meeting with an undercover agent in a NYC coffee shop.

Following that meeting, Anna was nabbed by police. She later pleaded guilty to conspiracy and was deported back to Russia in the biggest spy swap deal since the end of the Cold War. 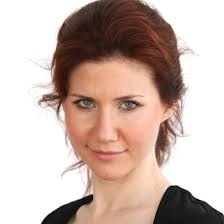 Anna Chapman’s arrest in the U.S. drew attention. She was, of course, beautiful – but her flirtatious nature also helped earned her the title, “sexpot spy.”

She was a real life femme fatale – good looks, smart, and according to the U.S. government – dangerous.

It’s unclear whether she was bred to become a Russian spy; we do know, however,  Anna started out studying economics in Moscow.  She met her husband, Alex Chapman, during a holiday trip to London. The pair married in 2002, dividing their time between Russia and England until their divorce four years later.

After the divorce, Anna moved to the United States. She settled in New York City and started her own real estate company. By day, Anna was a high-powered business woman. By night, she ran with New York’s hottest socialites. According to officials, Anna’s business and social activities were actually a cover for her real mission: to gather sensitive information. Anna and her network of other Russian spies were called on to develop “ties in policymaking circles” and send reports back to Russia, according to court documents.

Anna may have been deported back to Russia, but she hardly slipped into obscurity. She’s been known to model, walking a catwalk in Turkey last summer. She’s posed for magazine covers. She was also appointed to a position within the Young Guard of the United Russia party and has visited with the party’s leader and the country’s prime minister Vladimir Putin.

While most of the other spies in Anna’s network were granted new identities and new lives, Chapman built on her international notoriety – and continues to do so this very day.