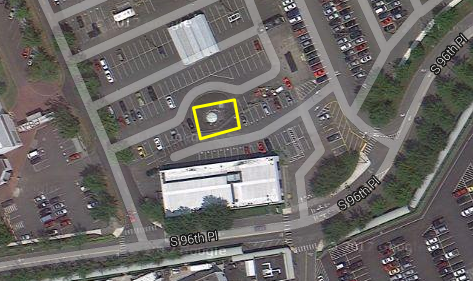 The picture above is a satellite image of East Marginal Way, Seattle. Highlighted in the yellow box is a grey-greenish dome in a parking lot. It may seem like an odd steel covering of sorts, an unremarkable remnant of the past. But for people like retired Boeing Engineer Dan Witmer, that dome was just more than a peculiar furniture on the face of downtown Seattle.

That dome is actually covering up a defunct Minuteman missile silo. And it wasn’t an ordinary silo; it was a testing site that made it possible for Engineers like Mr. Witmer to troubleshoot problems of the other missile silos spread across America.

Let’s travel back in 1962 where Seattle was experiencing the start of the Cuban Missile Crisis. It was the height of fear and panic as Soviet nuclear missiles were proposed to be placed on Cuba. People were preparing for the worst. Mr. Witmer still remembers the canned food which he and his wife have stockpiled in their Bellevue apartment. He also remembers his descent down into the silo where a Minuteman missile was being kept.

“You got down inside the silo by going down a ladder. It was like going down a ladder in a submarine. The missile sat in the middle. I wouldn’t say it was an eerie sort of thing; it was just our place of work.” – Engineer Dan Witmer

In the 1960s, a lot of missile silos like the one in Seattle were being built all across the United States that contained live nuclear warheads. The one in East Marginal Way didn’t contain a live missile because it was a primary testing site. If things have gone wrong on the other silos, Mr. Witmer and his colleagues would try to come up with the solutions. Like the one time they wanted to know if a missile silo on snowy areas would be defective if piles of snow and ice enclosed the silo cover. So they simulated the situation by bringing loads of snow from Snoqualmie Pass via trucks. They piled the snow on top of the cover and have confirmed that with enough snow, the cover could malfunction.

Solutions like metal teeth to crush the ice and special bumpers that pushed the ice away were installed on the covers. Mr. Witmer also tells this story about horse poop being used as a temporary solution. “They decided to deal with the problem by putting horse manure out in front of the lid, so as it gradually cooked and degraded, the heat would keep the snow from ever piling up in the first place,” Mr. Witmer said. Admittedly, Dan Witmer wasn’t sure if the story was true or not, but just imagine; national security came down to horse poop.