'The Americans' FX Brings the 80s Cold War Back 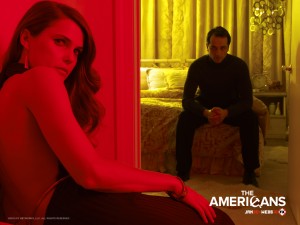 Leave it to FX to leave us at the edge of our seats once again. The same network that brought us hit shows like American Horror Story and Sons of Anarchy, is debuting a new kind of drama; one that takes us back to a decade Baby Boomers and Gen Xers know all too well: The 80s Cold War.

The Americans FX is a period drama about the marriage of two KGB spies posing as Americans in the suburbs of Washington D.C. Ronald Reagan has just been elected president and the country is torn between living in fear (of the Russians) and living a life of excess. Keri Russell and Matthew Rhys play Elizabeth and Philip Jennings, a couple who appears to be living the American dream. They have two children – 13-year-old Paige and 10-year-old Henry – who know nothing about their parents’ real identity, nor do they know just how complex their parents’ relationship is. While Philip and Elizabeth are passionate towards each other, their relationship is constantly being tested by the very people who put them on U.S. soil: The brawdy network of Russian spies and informants. To complicate matters, a FBI agent has just moved in next door and Philip is showing signs of turning against his Russian roots as he grows fonder of America’s values and way of life.

What’s unique about The Americans is the plot. It’s unlike any other espionage drama on television, and it was a created by a former spy. The series creator, Joseph Weisberg, worked in the CIA’s directorate of operations from 1990 to 1994. It’s been documented that Weisberg even used his spy knowledge to educate the cast on the intricacies of the spy world before shooting began.

“There was a great day before we started shooting when Joe sat us down—the writers, Adam Arkin our producer/director, and actors Keri, Matthew, and Noah Emmerich—and took a half-hour with a white board explaining surveillance to us, teaching us how to know if you’re being followed when you’re driving a car, without anyone knowing you’re looking. And then we all went outside and got to practice traffic surveillance,” says executive producer Joel Fields to Slate.

What we will see in The Americans is realism; the real world workings of foreign spies living on American soil. We will see the recruitment, the handling and running of agents. We will see their daily lives, their human relationships and drama.  We will NOT see or hear constant gunfire, chase scenes, nor the blood and gore normally associated with murderous dramas, such as Dexter or 24. The Americans is the real deal – all realism and credibility – right down to the Guess Jeans, Members Only Jackets, leg warmers, and shoulder pads to boot.