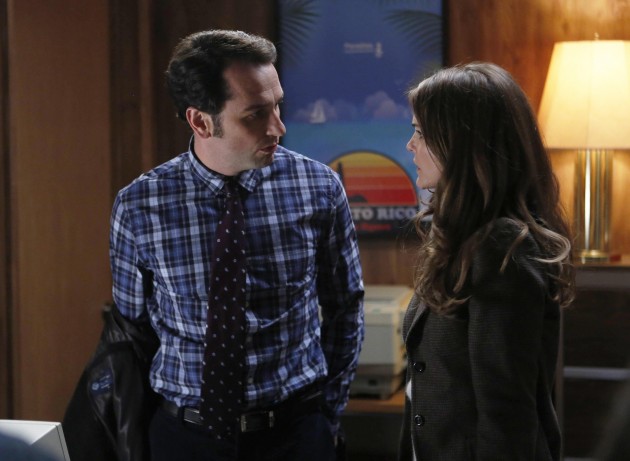 Aside from the announcement of The Americans Season 2 premiere date over the holidays, the people at FX has given us a very tiny sneak peak of what we can expect from the highly anticipated 2nd season. Above, you can see Philip Jennings (Matthew Rhys) and Elizabeth (Keri Russell) looking at each other, looking a bit worried. Matthew is on the process of removing his jacket while Mrs. Jennings is happy with hers on.

They are inside their office, which is a tour and travels agency, which they haven’t really talked much about in the show. And I really don’t know why since traveling is a really interesting subject. Plus the fact that they’re awesome spies with excellent business skills, what luck eh?

They say pictures paint a thousand words, so let’s try to interpret this. They look a bit worried, and they’re in the office. Maybe they’re talking about a mission, or something spy related. They could also be talking about their family, about their son and daughter, or this can be nothing and I’m just over-thinking.

Aside from this photo, two teaser trailers have been released by FX to give us a taste for things to come. The first video, a short scene where the Jennings couple are inside a closet, possibly hiding from someone. Oh and by the way, while hiding, Philip is holding a gun while a man is talking to someone on the telephone. It’s really suspenseful. The 2nd video is a promotion and might not be part of the series itself. It shows the whole Jennings family, kids included, in the dining room table. The kids leave and the parents play Russian roulette. You get it? Because they’re Russian and they usually have guns.

Anyways, other details we know about the show is that there is a new recurring character that will be played by Aimee Carrero. She is mostly known for her live action show Level Up on Cartoon Network and the play What Rhymes in with American in December 2012. Ms. Carrero will be playing a Sandinista fighter named Chena, a strong willed and headstrong person that will go to any length to fight for what she believes in. This also confirms that the second season will be exploring the 1980’s Nicaraguan Contra rebels.

Also in the 2nd season, for sure, is my favorite character Claudia (played by the wonderfully talented Margo Martindale). We’ve reported that she will be indeed back for at least one episode. I just hope that she will back for more and not be killed off in that one episode. She’s currently starring in her own network sitcom The Millers with Beau Bridges and Will Arnett. Aside from TV, she’s also part of the highly anticipated movie August: Osage County with other talented people such as Julia Roberts, Meryl Streep, Benedict Cumberbatch to name a few.

The Americans cast and crew are currently working on the 2nd season. You can watch The Americans season 2 on February 26, 10pm, on FX.

The Americans and the Golden Globes