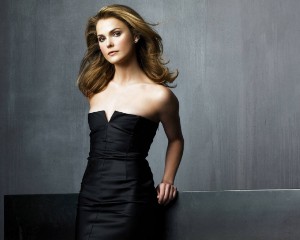 She’s come a long way from Felicity. Actress Keri Russell in The Americans  is all grown up now, and keeping very busy.

She’s married, a mother of two, and a highly successful actress starring in the new Russian spy drama as well as two films about to hit theaters: Dark Skies and Austenland.

You’d think fame and fortune were at the top of mind for Russell, but not so fast.

She tells the New York Times:

“I’m at a different level now,” said the actress, a mother of two who will turn 37 in March.“I was on a network show, which can make you more famous. I don’t want to be more famous. Luckily, there are people who like the limelight a lot more than I do.”

Right now, Russell is on the promotion circuit, talking up both her hit FX show The Americans and the sci-fi film Dark Skies which lands in theaters this Friday. Dark Skies follows the Barrett family — Lacy (Russell), Daniel (Josh Hamilton) and their young children (Dakota Goyo and Kadan Rockett) — as an alien threat makes its presence felt.

‘It’s a story about this family trying to keep outside forces away from them and trying to protect each other,” says Russell.

The film is a far cry from the problems facing the family at the center of FX The Americans, shown on Wednesdays. The show, which has garnered rave reviews from critics and fans a like, is centered around Elizabeth (Russell) and Phillip Jennings (Matthew Rhys) who are Russian spies embedded in suburban Washington circa 1981. Their marriage was arranged by their Soviet spy masters, but now there are children and genuine feelings.

“We’re always in a constant state of danger,” Russell says, “but we’ve still got to get the kids to school.”

Also keep an eye out for Austenland, which was a hit at the recent Sundance Film Festival. It’s a romantic comedy in which Russell plays Jane, a woman obsessed with Jane Austen and her classic novel Pride and Prejudice. She visits an Austen-themed resort in England, where she has the experience of a lifetime.

Russell has a lot on her plate indeed. And as a fan of hers and her new show The Americans, I LOVE seeing her plate full.