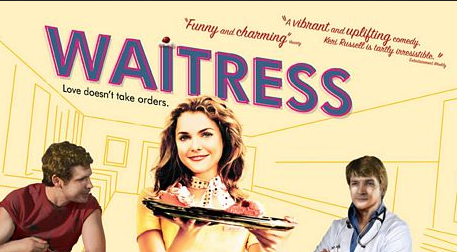 ‘Waitress’ was Director/Actress Adrienne Shelly’s last film but it was, at least for me, Keri Russell’s first great film. The movie is really comparable to the pies that Russell’s character bakes, simple yet delicious, bitter at times but ultimately sweet. Keri’s character “Jenna Hunterson” is a waitress who works in a small diner in a small town. Generally, her sweet life is ruined by the fact that she is married to a monster named “Earl” played by Jeremy Sisto. Jenna works all day by waitressing and cooking pies named after her life circumstances like “I Hate My Husband Pie” and “Baby Screaming Its Head Off in the Middle of the Night and Ruining My Life Pie.”

After a long day’s work, Earl collects all of Jenna’s tips like a pimp. But Jenna has a plan. When she can, she set asides money so she can go to a National Pie Baking Contest and win $25,000, enough money to get away from her husband and start a new life as a pie baking super star. Her plans were seemingly ruined when she learned she was carrying Earl’s baby.

She then meets the new doctor in town “Dr. Pomatter” played charmingly by Nathan Fillion. And you know what happens when you put two attractive people in the same room, an affair of course. This becomes a slight source of happiness for Jenna and as a viewer; I was rooting for this relationship to blossom. Did I mention Dr. Pomatter was also married? If you haven’t seen this movie, it might seem like a pool of moral dilemmas and unbridled misery but it’s not. As I said, the movie is a bit bitter but mostly sweet. Part of Shelly’s skills as a director and writer is to present the movie in funny and likeable way where in you really can’t help yourself to fall in love with the characters.

Keri Russell is the key to making the movie good. She becomes a secret ingredient, the one that makes the whole thing click. Her irresistible charm and acting skills combined were essential to make her character loveable, even if she was stuck in this string of bad luck and immoral choices.

If you haven’t seen this movie, go buy the DVD, rent, Netflix it, or stream it, just watch it, it’s really good. But before you do, just a word of caution, wear a belt. Nathan Fillion and Keri Russell will definitely charm your pants off.

The Americans DVD Available for Pre-order