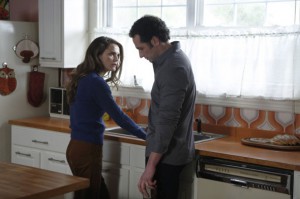 The video above takes a look at the brilliant work of Costume Designer Jenny Gering on the Hit FX Network show The Americans.

Jenny Gering, who’s work you may know from films like “The East”,  explains the trials and tribulations of maintaining a proper look for a television show set in the 1980’s

As someone who lived through it, I would say she is pretty right on (although I am dreading the return of the leg warmers).

Everybody Needs to Be Dressed

When making a television show that is set in a different time period, like The Americans, every person you see on screen must be dressed.  Whether it is Keri Russell in some “mom jeans” or a skinny tie for Matthew Rhys, you can’t expect the talent to have this stuff in their closets.

Bringing it to another level, you can’t have the background characters walking around the streets of 1980’s Washington DC wearing “Sketchers” or a Lady GaGa tour shirt… They all need to be dressed too.

Jenny Gering, and everyone in the costume department for The Americans really deserves a bit of recognition for the stunning job they do maintaining the realism with the wardrobe on The Americans.

Many people forget that Television shows are such a collaborative effort. They forget about the wardrobe people who make sure every button & stich is right where it needs to be, the make-up and hair department who know what shade of blush they used in 1982, and how to feather or perm the hair just right. the prop team who makes sure 30 year old gadgets look brand new, the lighting & grip crews, the camera department, and so many more…

So next time you are watching (or re-watching) an episode of The Americans, take a moment to appreciate all the work the went on behind the scenes to bring the Jennings world to life.