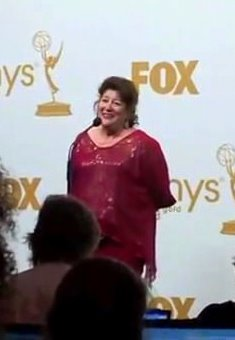 Our beloved, Emmy Award winning Margo Martindale will star on a new  CBS show titled ‘The Millers’ alongside funny man Will Arnett (‘Arrested Development’, ‘Up All Night’) and Beau Bridges (‘The Goodwin Games’, ‘Franklin and Bash’).

The show is produced by Greg Garcia the man responsible for ‘My Name is Earl’ and ‘Saving Hope’, and directed by James Burrows known for shows like ‘Will and Grace’, ‘Mike and Molly’ and a list of other great programs.

The show is about Jack (played by Will Arnett) who just got recently divorced and is planning to live the single’s life again. When Jack tells his parents about it, Tom (Beau Bridges) gets inspired to leave his wife, Carol (Margo Martindale). Carol then decides to live with son, and in the process, ruin his plans for an awesome life of a single man.

It’s a welcome change for ‘Claudia’ fans like me who wants to see her revert back to roles that don’t carry shock guns and surgical knives. Margo Martindale has been all around TV lately and she sure deserves her lead spot on a network program. But sadly, this makes her schedule a busy one so we cannot be sure if we’ll get more of our adored ‘Claudia’ in the next season of ‘The Americans’. I guess our love-hate relationship will have to take the back seat for a while. But don’t lose hope. I’m sure the producers will make a way to find an opening in her schedule and satiate our ‘Claudia’ cravings.

It sure is sad to see one of the best actors in ‘The Americans’ (she was nominated for Best Supporting Actress, again!) to leave and have a lead role in a new show, but the best thing for us to do is hope that she does well, which we know, she will.

‘The Millers’ will air on September 2013 and ‘The Americans’ will show their 2nd season on January 2014.

Fashion of The Americans

Keri Russell to Star in Austenland