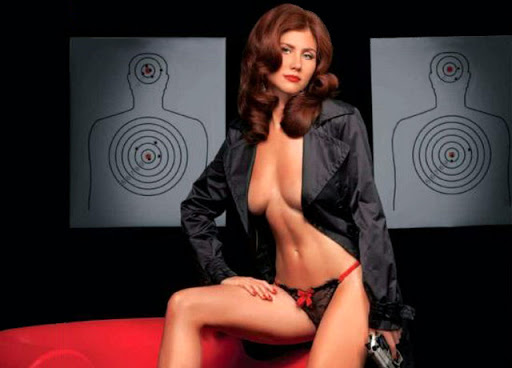 Anna Chapman, the sexy Russian spy has released de-classified information about her new clothing line. Ms. Chapman has presented fashionable “casual clothes” at a show in Antalya, a Turkish Resort.

“A well-known online shop will be put in charge of launching these sales in order to allow Russian women to have the broadest possible access to Anna Chapman’s first collection. Her further plans include setting up both specialized shops and selling the collection at multi-brand shopping malls,” said Gregory Belkin, spokesperson of FundServiceBank, where the former spy works as an advisor.

The sale of the clothes is expected to start early February. Ms. Chapman hired young designers to come up with clothes that she describes as “lethal weapons for women.”

“The core of the collection is a range of dresses that almost every Russian woman can afford to buy in terms of both their price and stylistic features,” Mr. Belkin said.

The Russian spy sex symbol said that her fashion line is “entirely created in Russia. It includes motifs from Russian folk tales and folklore. It would be available in many cities, including Moscow and Sochi”

Ms. Chapman says that her inspiration for the clothing line was she had the prison shirt-on and wanted something more fashionable that was made in Russia.

“I wouldn’t say Anna Chapman herself has ideal taste,” said television host and stylist Grigory Lisovets. “She wears clothes that are absolutely ordinary.”

“A lot of media figures are presenting themselves as designers and couturiers, but this is far from the case,” collector and fashion historian Alexander Vasilyev said. “I wish her well but I don’t think her collection will be a success.”

Ms. Chapman is infamous for being a spy who lived in the United States. She was deported to Russia through a prisoner exchange deal, but not being before being known as a sexy Russian spy.

Documents and videos released through the freedom of information act revealed abundant information about her spy life in New York City. The fiery redheaded woman is a daughter of an alleged KGP officer. She got her last name from her former husband Alex Chapman who she first met on a trip to London. The New York police accused her of being a member of a sleeper spy group in 2010 which then lead to the arrest of Chapman and other Russian agents.

On her return to Russia, she dabbled in politics but was known more for her sexy pictures in men’s magazines like Maxim. She also became a catwalk model and presented clothes by other designers. Aside from being an adviser, she is also a TV host in Russia in a show about the mysteries of the world.

She is also known for some comments regarding Edward Snowden wherein she proposed to the former NSA contractor through Twitter.

Winners of The Golden Globes