Spy Cams on Your Smart Phone 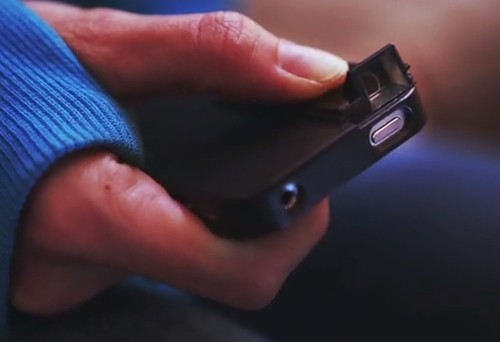 Let’s imagine a scenario. You’re sitting on a train and suddenly, a cute guy or girl, sits across from where you’re sitting. You want to take a picture of that attractive person but doing so with your smart phone will make you appear like a total creep. If you want to appear less creepy, there are two smart phone add-ons that will turn your ordinary camera into a spy camera.

Well, technically, COVR Photo is a smart phone case with a periscopic lens for the smart phone camera. You can hold your smart phone flat on your hand and COVR will give you the ability to take pictures candidly, without the subject’s knowledge. Basically you’ll appear innocently looking at your screen but in actuality you’re taking a photo of anyone and everything you want.

The creator of the nifty gadget, award winning photojournalist Thomas Hurst, says that COVR Photo was not made for “spying” but to give the ability for people to take pictures without disturbing “the uniqueness of what is unfolding before you,” according to the gadgets Kickstarter page. Hurst also says his creation is very useful for live photography like taking candid shots of your friends or your family, or naturally taking a picture of people passing by the street.

The project started on Kickstarter but has already been fully funded. People who made donations to the said project will be receiving their own COVR Photos but if you also want to buy one they you might have to wait for Hurst and company to release the retail version that will cost $70.

If you don’t want the whole cell phone case then there’s another option that you might be interested in. Spy Cam Peek-I is not a case but an attachment that is magnetized to fit around your cell phone’s camera. Like COVR Photo, the smart phone add on also started on Kickstarter (you can still donate money if you want, as of this writing they’re still accepting money).

The Spy Cam Peek-I can not only also take pictures of people and things in front of you, it can also sneakily take pictures of subjects on its sides. Their Kickstarter page doesn’t claim any heartwarming reasons for such a gadget it only says “Peek-I helps you take pictures discreetly. Easily attach Peek-I to the camera of your device. As a periscope Peek-I will reflect the image at a 90° angle.”

Spy Cam Peek-I is also a lot cheaper compared to COVR Photo. A single piece will only cost you $15 while a box of 40 pieces will set you back $300.

Both of these devices are not yet widely known but I’m quite sure that when these add-ons explode, it will be another topic about the right to privacy. Recent news have centered on the right of a person to be safe from any kind spying especially people who are already in the comfort of their own homes. Donald Sterling, owner of the L.A. clippers was recently recorded saying racist remarks. His action was deemed very inappropriate but it also sparked a discussion about privacy.