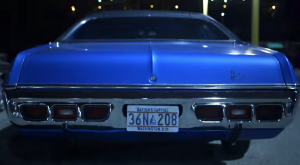 When someone says “Spy Car”, admittedly, the first thing that pops in my head is James Bond’s Aston Martin with rocket launchers and oil slicks and ejection seats. Well you don’t see much of that in The Americans.

You are more likely to see Keri Russell or Matthew Rhys’s Characters driving around in an old ’73 Mercury Cougar (lime green… at least that was my first car), then in a Lotus or Morgan.

Since The Americans takes place in the 1980’s, part of the prop departments job is to make sure all the cars (that our characters are driving as well as the background cars) are all period correct.  That means lots of old boxy sedans… makes me feel like a kid again.

The Team That Makes it Happen

Duke Scoppa, the Prop Master on The Americans (who you may know from his work on Shutter Island, or Flight of the Conchords), discusses the difficulty in having so many old cars on the set in the video above.

The stars of the show tell their own automotive horror stories as 80’s clunkers won’t start in the middle of scenes,  heater won’t heat up between takes, and cars just act like 30 year old cars.

But at least they had big trunks.  When I was in college I had bought a 1964 Pontiac. I was working on the tail lights one day from inside the trunk, and my roommate almost closed me in. He didn’t see me in there. And I am not a small person. Those old American cars definitely had enough room for your set of golf clubs, and a dead body…

Cars play an important part of American cinematic culture. One of the things that always draws me to period pieces is the ability to see the past roads of America come to life again in the way they were only in memories. The Americans succeeds in that. It shows me, once again, the streets of my childhood.