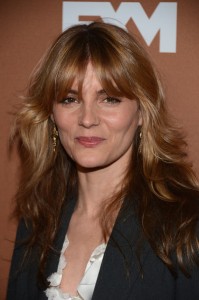 Susan Misner is another beautiful actress on our beloved show! Being the loyal wife to a cheating FBI husband is not a piece of cake. But the woman has come a long way and is already promoted to a series regular.

Susan Misner has talent and she has made full use of it. We haven’t had the pleasure of seeing too much of this pretty face on The Americans, so, you might want to check out her other performances. Misner’s list of TV shows is ceaseless! She has appeared in shows like, Soul Man (1997) as Dept. Store Woman in episode: Christmas Ruined My Life, One Life to Live (1999) as Grace Davidson Buchanan, Ed (2000) as Female Teacher in episode: Better Days, Sex and the City (2001) as Shayna in episode: Time and Punishment, CSI: Crime Scene Investigation (2002) as Cassie James in episode: The Hunger Artist, Law & Order: Special Victims Unit (2002) as Ronnie Marshall in episode: Dolls, CSI: Miami (2004) as Heddy Latham in episode: Not Landing, Jonny Zero (2005) as Eve in episodes: Pilot, La Familia, Lost and Found, Bounty, To Serve and to Protect and Man Up, Without a Trace (2004-2005) as Helen / Hope / Jessie Prince in episodes: The Line and John Michaels, Starved as Alison in episodes: The Breatharians, Viva La Cucaracha, Thank You, I Love You and Scrotal Origami, Night Stalker as Irene in episodes: Pilot and The Five People You Meet in Hell, Conviction (2006) as Alexis Bennet in episodes: Hostage and 180.80, Vanished (2006)as Nadia Sands in episodes: The Cell and The New World, Law & Order (2006) as Samantha Weaver in episode: Corner Office, Rescue Me (2006-2007) as Theresa in episodes: Baby Face, Beached, Hell and Twilight, The Kill Point (2007) as Lorna Ash in episode: No Meringue, The Bronx Is Burning (2007) as Gretchen Martin in episodes: Mr. October, The Straw and The Game’s Not as Easy as It Looks, Fellas, Gossip Girl (2007) as Aliso
n Humphrey in episodes: Roman Holiday,  Hi, Society,  Blair Waldorf Must Pie! and Seventeen Candles, New Amsterdam (2008) as Callie Burnett in episodes: Love Hurts, Reclassified, Legacy and Keep the Change, Life on Mars (2008) as Carol Ann Reeves in episode: My Maharishi Is Bigger Than Your Maharishi, Fringe (2008) as Tess Amaral in episode: The Dreamscape, Law & Order: Criminal Intent (2001-2009) as Becky Stark / Mary Devildis / Sister Olivia in episodes: Smothered, Acts of Contrition and Family Values.

More recent work on television by Susan Misner include, Royal Pains (2009) as Claire Grant in episode: No Man Is an Island, White Collar (2009) as Dana Mitchell in episode: Flip of the Coin, NCIS (2010) as Leah Mayne in episode: Double Identity, In Treatment (2010) as Wendy in episodes: Frances: Week Three and Sunil: Week One, I Just Want My Pants Back (2012) in episode: Safety Nets, Person of Interest (2011-2012) as Jessica Arndt in episodes: Pilot, Mission Creep, Blue Code, Matsya Nyaya and Many Happy Returns, The Good Wife (2011-2013) as Simone Canning in episodes: Real Deal and Boom De Yah Da, Blue Bloods (2013) as Karen Waters in episode: Men in Black, The Following (2013) as Jenny Hardy in episode: Mad Love, Nashville (2013) as Stacey in episodes: Why Don’t You Love Me, Take These Chains from My Heart,  My Heart Would Know, I Saw the Light and When You’re Tired of Breaking Other Hearts.

Susan Misner has appeared in a number of movies recently, like, Hope Springs Dana, Doctor Feld’s Wife and we recommend you check out these amazing works by this busy actress!