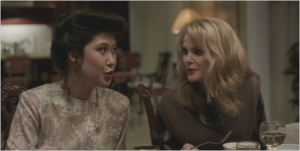 The episode opens undercover, if you will. We start with Phillip waking up on the fold out bed with Martha. He is being Clark for the night. Martha has been staring at him in his sleep, and he asks her what she is doing. “Still not used to it” she responds. Indeed.

We then go to Elizabeth. She is dolled up, and wearing a blond wig. She appears to be infiltrating a secret American Mary-Kay make up marketing group. Young Hee, one of the women there, goes on and on about how make up counter girls can never get foundation right for Asian skin, it always makes them look green. “I tell my friends they don’t have to look like Martians,” Young Hee says. “We are all Americans now.”

“I understand the need for secrecy, but let’s be clear — a pastor’s obligation to keep his parishioner’s secrets ends where his duty to the greater good begins,” Pastor Tim says… Let’s be Clear Tim, telling a couple Russian Spies that you might rat them out isn’t very smart. Phillip explains that if Tim turns them in, Paige and Henry will go into foster care, and may never see their parents again. Pastor Tim suggests they think about things for a few days and then talk again. Phillip ask if Pastor Tim has told anyone else, like maybe his wife… “Alice and I minister to each other,” Pastor Tim says, and then assures them that his wife Alice understands the sanctity of secrecy.

Let’s be Clear Tim, telling a couple Russian Spies that you told your wife about the Russian spies isn’t a very smart thing to do either.

Elizabeth and Phillip go see Gabriel, Phillip hands over the bio agent that he has had since the first episode of the season, and he asks that the Center pull them out. Gabriel assures them that there is always other options, but Phillip is sure that Paige will figure it out if Pastor Tim and his wife Alice die suddenly. Elizabeth takes Gabriel’s side as she obviously wants to stay. This seems to settle the matter.

Gabriel then goes to talk with Claudia in a scene that oddly mimics the previous. This time Gabriel is saying that the Jennings have to be pulled out, and Claudia is saying that there is always another option. It is as if all of the handlers have their trained response the belch out to calm down the asset, even if they don’t believe the response themselves. Gabriel told it to the Jennings, and now Claudia is telling it to Gabriel.

Elizabeth, in the same Mary-Kay get up, runs into Young Lee at a grocery store. She convinces Young Lee to offer to help her with her Mary-Kay selling. Young Lee (or someone close to her) is obviously the Target of this operation. They do their thing, and Elizabeth plays the housewife looking to make some money role well. Young Lee ends up inviting Elizabeth over to her place for dinner.

The dinner seems normal, as Elizabeth eats hot peppers and talks about wine with Korean food. It may be that Young Lee’s husband is the actual target here, but nothing has been revealed as of yet.

Gabriel tells Phillip and Elizabeth that they should take there kids down to Florida to visit EPCOT center at Disney World. While they are gone, Pastor Tim and his wife will have an accident.

Phillip doesn’t like the plan, he is sure Paige will figure it out. Gabriel tells them that she may suspect, but won’t know. “People Believe what they need to believe”. 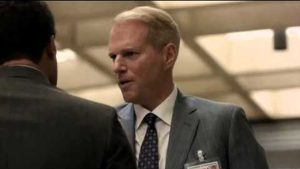 Paige confronts Pastor Tim about revealing her family secret to his wife. It doesn’t go over well for him, and goes even worse when he questions whether or not people are getting hurt because of what Phillip and Elizabeth do. Paige storms out convinced he is wrong, but the seed has been planted.

Phillip and Elizabeth head over to see Gabriel, but when they get there, he is on the ground coughing and sick. The bio weapon got out. Phillip signals the guy they got it from, and they meet in a park. Phillip explains what happened, and they guy listens, then runs. Phillip chases him down, tackles him, and spits in his face. Now their infection is his problem as well.

The Bio guy gets a special antibiotic from his home that should cure them. The take it, and then go to see Gabriel. They give him the shot, and put the thermos with the bio agent in it into the oven to kill the virus. They now have to quarantine themselves 36 hours to make sure they antibiotics worked.

This isn’t good. The Jenning have now mysteriously disappeared right before their EPCOT trip. Pastor Tim and his wife will be murdered, while the Jennings are missing… Paige will assume they did it.

As Phillip looks at the thermos in the oven cooking away, you can only imagine he equates it with his life… going up in flames.

Also in this episode: Back in Russia, Nina is having a bad time. She is informed that since she has already been found guilty of treason, they will not give her a new trial for her latest transgression, but will instead just figure out a new sentence. Things look bad for Nina, and her only escape is in her dreams of Stan.

Speaking of Stan, he is beginning to suspect Martha, and wants other FBI agents to help him watch her. They don’t seem to keen on the idea. Stan’s ex-wife stops by to visit Phillip and they discuss ETS. They don’t show if Stan saw her car at Phillip’s, but with Stan’s anger at Phillip and suspicion of Martha, things could go south fast for the Jennings.

This season is not going to well for our favorite sleeper cell soviet comrades (I guess they are a pretty active cell, so they wouldn’t be sleepers)… How will they get out of this?