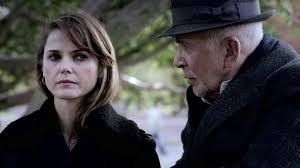 The second episode of the fourth season of The Americans, Pastor Tim, raises the tension and paranoia of the last episode to new heights. For a show to hold this level of tension across the entire run time of an episode is a feat in itself, but to do it across multiple storylines and character arcs is amazing to watch.

Picking up right where the last episode left off, Elizabeth questions Phillip about the altercation in the garage with Stan. He confides in her that he has been going to EST, and had coffee with Stan’s wife afterward. This is a very touching moment between the Jennings as Phillip admits that things have been bothering him and EST is helping. Elizabeth asks if EST is something Phillip would like her to accompany him to which showed a softer side of the usually hard character.

The Jennings want to rid themselves of their biological package, but Gabriel wants them to deliver it to a pilot who will smuggle it out of the country. The nervous pilot refuses in a scene that Phillip publicly murdering an airport guard in a rather intense scene set to the tune of “Tainted Love”. 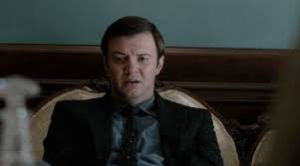 Nina gets to meet with her husband who we find out she left to join the KGB. He now has kids with another woman that he lives with, but he still loves Nina. Nina asks him to smuggle a note out for her that we later find out is a message for the scientist she is working’s son. The higher ups are not happy about her attempt to sneak out information. This could have dire consequences for Nina, but we will have to wait until next week to find out.

Oleg is informed that his brother died fighting in Afghanistan in a scene that surely parallels contemporary events in America, and serves as a solemn reminder of the individual similarities of the people overshadowed by this war of superpowers. This is an incredibly powerful scene overall although it is minimal to the storyline of this episode. Later, when Stan informs Oleg that the USA will not be negotiating with the USSR for Nina’s release, Stan mentions that he heard about Oleg’s brother, and he tries to console him to which Oleg replies “so we’re friends now” as he gets out of the car taking this event that, just earlier, brought the viewers and the Soviets closer together, and pushes the characters in the show further apart.

Elizabeth discovers that Paige told Pastor Tim about their true identities. Elizabeth wants to kill Pastor Tim, but Phillip is worried that Paige will figure it out. Elizabeth convinces him, and they start doing a bit of recon eventually figuring out that Pastor Tim goes to a cabin to write his sermons. They decide to stage an “accident” in the cabin. Their plan gets interrupted when Paige admits that she told Pastor Tim everything. Now, she is sure to know they are behind it if he mysteriously ends up dead. Getting rid of Pastor Tim isn’t going to be as easy as they thought.

Meanwhile, Gabriel wants the bio weapon guy to get something from level 4. Unfortunately, he doesn’t have access to level 4 so Phillip and Elizabeth have to try and get it for him. Phillip brings this up, but the contact asks him to fail at getting the access. Does this agent have sympathies for the USA, or is he just scared to sneak into level 4?

Gabriel informs Elizabeth her mother has passed away, and this almost cracks through her granite exterior. When she tells Paige that her grandmother died, you can tell Elizabeth is doing everything she can to hold it together.

By the end of the episode, nothing has gone right for… anybody. Elizabeth is outside having a smoke when Phillip gets home. He pulls in the garage, and she follows him in and gets in the car with him. She tells him about Paige’s confession, and about her mother passing. The episode ends with Elizabeth proclaiming “we’re in trouble” to which Phillip replies “I Know”. 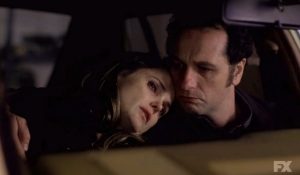 Many many years ago, I worked a few days on the first season of Felicity. I always remember Keri Russell’s youthful exuberance. She had an aura of joy about her. Seeing her sitting in that car at the end of the episode with a face that relayed such an overwhelming sense of dread was shocking to me. Now I know 18 years has passed since then, but this wasn’t a look caused by time or age. This is a look created by amazing acting talent. Elizabeth Jennings siting in that car is so far removed from Keri Russell. She really deserves an Emmy for this season, and we are only in the 2nd episode… I can’t wait to see the rest of the season.