The Americans Season 1 Episode 12- “The Oath”: Weddings and Confessions 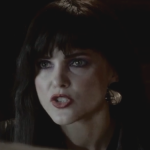 In the beginning of The Americans Season 1 Episode 12, we see Elizabeth have a meeting with Prince in her adorable gothic getup. She gets disoriented as Prince informs her of his act of recruiting a colonel, in air force intelligence, who could has a lot of valid information to help the USSR. Elizabeth asks to see some information as evidence of what Prince claimed but he tells her that she’ll have to buy the information for 50 grand! She refuses saying that she’ll need to know more in order to pay him such a huge amount. Elizabeth is seen with Philip, both of who are uncertain about the deal with Prince. Claudia, however, assures Elizabeth that the Centre had reviewed and approved of the colonel being real and that there was a meeting set with the colonel. Elizabeth, still having all sorts of doubts about this mission, tries to put up an argument but Claudia says that even if this is a set-up, it is worth the risk. When Elizabeth talks to Philip about this, he suggests to contact the Centre themselves to find out if Claudia’s orders were for real. Philip also has another idea to put a bug in Agent Gaad’s office to spy on the FBI conversations and ascertain whether they had assigned the colonel to delude the KGB. Elizabeth is skeptic of the plan but Philip seemed to have contrived a mission of his own.

We soon discover his intensions meets Martha at a fancy restaurant and out of the blue, throws a marriage proposal on the table! Martha, being over the moon for Clark, manifestly accepts the proposal. No much later, Philip slips in a request to put a pen in Agent Gaad’s office and Martha, to my surprise, doesn’t refuse! It’s funny how love makes you blind and naïve in so many ways. In a waffling manner, Martha manages to plant the bug in her boss’s office. She calls Clark/Philip that night letting him know that she had made a list about getting married to him, where the cons are more than double the pros. She insists on being able to tell her parents about her wedding and Philip, seeing no way out, agrees to it and the wedding is back on! 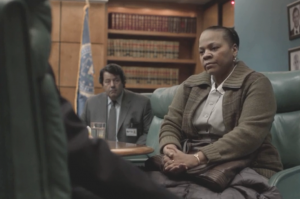 Philip wasn’t the only one busy with bugs, when all this going on with the KGB officers, the FBI also had a break through. Viola, with the veneration of the deity in her heart, couldn’t suppress the secret she bore. Viola told everything to FBI who were now planning to use the KGB’s trick against them. The Federal officers decided to only say the things around the bug which they would want the KGB to know. This is an interesting turn of events in The Americans Season 1 Episode 12. While the FBI is counting on misleading the KGB with their new plan, the KGB, still unaware of the fact, already has another bug planted in the FBI office. How long will it take for Elizabeth and Philip to realize what the FBI had planned? Who will get to whom first? The Americans Season 1 Episode 12 left these questions unanswered so far, probably to be revealed in the Season Finale.

Back to the wedding, Philip was willing to take some time but Martha wanted the wedding soon. For the ceremony, Philip needed some family members and thus he gets Claudia to play his mother and Elizabeth to play his sister. The short wedding ceremony took place quick and sweet in a church where the two took their vows and kissed. By the end of this, the woman in Elizabeth spoke up again. She says that the ceremony was beautiful. It didn’t look like she was hurt or jealous by her husband marrying another woman; rather she felt pity for her own situation.

As The Americans Season 1 Episode 12 reveals that Elizabeth and Philip were never really married before they were sent off to start a new family.

Elizabeth seemed touched by the wedding ceremony and realized that things in her life could have been better if she got an actual wedding; after all, every woman dreams of getting married and has her own plan for the biggest day of her life. As for Philip, the man lived in fake marriage for years followed by another semi-fake marriage.

While all this was going on, Nina was taking an oath to be loyal to her country and protect its people, sometime during the beginning half of The Americans Season 1 Episode 12, but by the end of the episode she came to Arkady Ivanovich and confessed that she was the mole who worked for the American intelligence. Nina possibly realized that Stan was behind the murder of Vlad, who was not only a friend but also an admirer of Nina. It is unlikely that she made the confession simply because of the oath because if she was such a true patriot then she would never have shaken hands with the FBI in the first place. Now it will get much more interesting if Arkady the mole against the FBI giving Nina an opportunity to correct what she had wronged. But these are pure speculations and The Americans Season 1 Episode 12 doesn’t disclose any of these secrets.

Quotes from The Americans Season 1 Episode 12