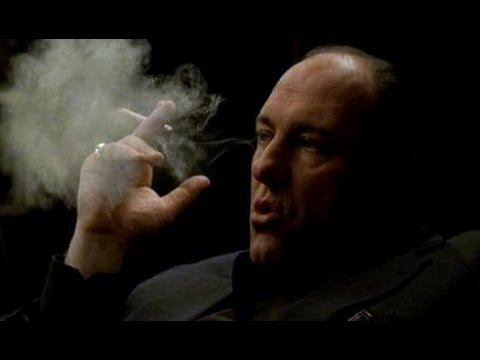 I’ll be making a female version of this article in the near future to be fair, but for now, let’s talk about the male lead characters in drama. A lot of new shows will be appearing this year, one the most notable is HBO’s True Detective starring Matthew MaConaughey and Woody Harrelson. These two people are very talented, so before they make the list of TV greats, let’s look back at the kings of TV drama.

James started it all. Cable’s most famous mob boss was one of the finest actors ever. He revolutionized how we view lead characters by portraying someone who was morally corrupt but still very likeable. First proof that he was different it the first time we saw him in a shrink’s office.

He passed away at an early age but left us with so many memories. Thank you Mr. Gandolfini, you will be forever in our hearts.

How great was X-Files right? In terms of originality, the show is the best example of what original shows are. The program was such a perfect combination of the different aspects of what made a remarkable show. The writing, directing, lighting, sound, and especially the acting. Duchovny’s Fox Mulder was an early template of how an interesting TV character should be, complicated, witty, and very charming.

Here’s a trivia for yah. The X-Files was one of the reasons why Breaking Bad was created. You see, the young Vince Gilligan was a writer and producer on The X-files. In one episode called Drive, Gilligan wanted Cranston to play the part of the villain “We had this villain, and we needed the audience to feel bad for him when he died. Bryan alone was the only actor who could do that, who could pull off that trick. And it is a trick. I have no idea how he does it.” And that’s the same trick that landed Cranston the character of Walter White, all thanks to Gilligan and The X-files.

British actors have experienced two things, be loved, and be hated. When they were sparse and we were actually surprised to know that our beloved TV characters were British, we loved them. But now, since they’re everywhere, suddenly, they’re not too special anymore. That’s one of the reasons why Matthew Rhys is an underappreciated actor (technically, he’s Welsh). Seeing how Mr. Rhys interacts with Keri Russell on The Americans is really special. He doesn’t really have explosive scenes, but the little details of his actions is a huge testament of how great an actor he is.

Speaking of love hate relationships, I give you Damian Lewis. I stopped watching Homeland at the end of Season 3 because I couldn’t bear watching another second of it. Homeland was superb on seasons 1 and the middle of season 2, thanks to suspense filled writing and great acting. The trio of Danes, Lewis, and Patinkin will be forever remembered as one of the best ensembles ever. But halfway through season 2, everything went downhill. Lewis acting chops couldn’t save stupid writing. But even though Homeland took an ugly turn, Lewis’ performance on season 1 and halfway of season 2 will never be forgotten.

New Teaser Trailer for The Americans