What Exactly is A Sleeper Agent? 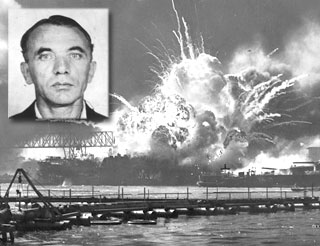 (Above: Bernard Julius Otto Kuehn, a German Nazi sleeper agent who worked for the Japanese intelligence)

Sleeper agents have been used as plot devices in different stories in books, movies, TV, and even comics. As a child being exposed to different forms of media, admittedly, espionage stories were really never my thing. But as an adult, spy stories became more and more interesting as more TV shows and movies were made like ‘James Bond’, ‘Chuck’, ‘Homeland’, and now ‘The Americans.’

In my childhood, my interest for spies was dormant, which caused my knowledge about the Cold War to be very limited. I had to base what I knew from what I read and what I saw, so I ended up believing that a Sleeper Agent is a spy just like Angelina Jolie’s character in ‘Salt’.

As I’ve read more and more about espionage, I’ve discovered that there are still a lot of things that we don’t know about spies and the details of their actions. There have been projects by the CIA to hypnotize people into assassinating targets. And if you believe in psychology (some people don’t) suggestive hypnosis is really possible to carry out actions from simple infiltration to murder.

Back to Angelina Jolie’s ‘Salt’, her character was a Sleeper Agent which was activated by a phrase or a word. There were cases were assassins claimed they were under a trance or possibly hypnotized, but I don’t think that there was an incident were a person was officially labeled as a Sleeper Agent who was “activated” by a trigger word or phrase.

Based on all the official knowledge that we’ve accumulated so far, Sleeper Agents are just like what we see on ‘The Americans’. No hypnosis, no trigger words, just old school espionage. Sleeper agents are usually planted on the target countries assimilating cover names and living like normal people. The term “sleeper” is used because these agents, once planted, avoid contact from the government that they serve and do not acquire any new intelligence for years.

The best sleeper agents assimilate so well that they get jobs and are able to finance themselves. This removes the need for them to get money from sponsors or people from their original government, which is useful because payment traces will not exist.

The highest goal a sleeper agent can achieve, aside from obtaining and divulging important intelligence, is to be an “Agent of Influence”. An agent of influence is a sleeper agent who rose to power, position, or became successful and is able to influence the opinion of the public and the decisions made. The agent then influences things to happen in favor of the government he or she is secretly working for, directly or indirectly.

So far our heroes/anti-heroes Phillip and Elizabeth are doing okay and have successfully kept their covers. In the future, are they going to be Agents of Influence? Or just normal parents by morning, deadly spies by night?

The Americans: Stunts and Pyrotechnics

The Man behind The Americans