What It's Like to Meet Phillip Jennings…Uhhh Matthew Rhys! 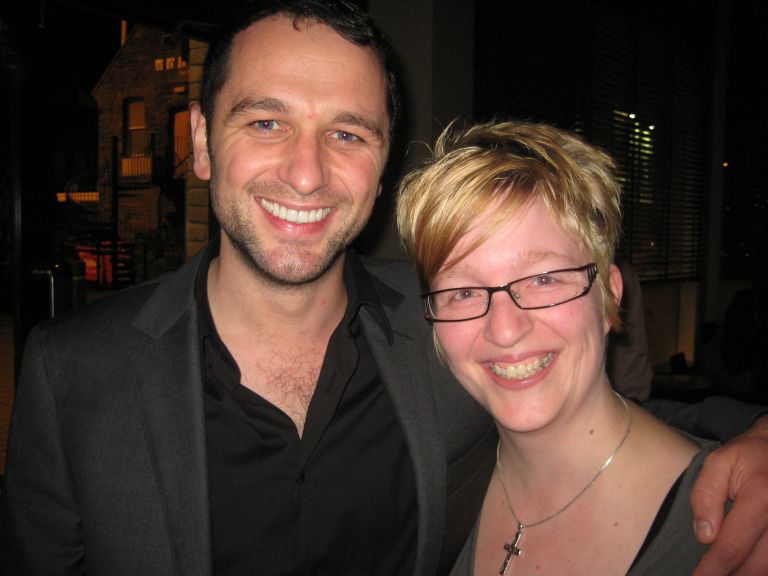 Some of you might know me from the website that I’ve created for Matthew Rhys almost 6 years ago. It’s called Matthew Rhys Online.

I got to know Matthew’s acting skills through Brothers and Sisters….well that’s what I thought as I seemed to already have a movie in my collection starring Matthew…called The Abduction Club.

And…well….let’s say…there suddenly was an opportunity to go to the World Premiere of The Edge of Love in Edinburgh, Scotland, UK (2008). I asked all the members of the fansite if they wanted me to give something to Matthew in their name…and low and behold I got a couple of reactions…Off to Edinburgh…with a suitcase full of gifts and cards!!!

Here’s a quote from my encounter taken from my website in 2008;

So we went in the theatre and to our big surprise a photographer told us that Matthew was still in the building cause they were doing an intro to the movie in every room…OH MY GOD..that’s what I thought. So the photographer told us to stay where we were and not to move until it was the time to go and watch the movie.. most of the people were already in the rooms. But we waited…and I still can’t believe it, when Nadine hit me to say that Matthew came out of room 1 and we both immediately showed our tickets…and went in.

I grabbed Matthew’s arm…lol…not really hard…but I had to get his attention somehow…!! He looked at me and I asked him if we could have a photo together..and he said in a few minutes as I have to do an intro in Room 2….so I said ok…me and Nadine waited and there he was…walking behind Sienna and Keira (they had bodyguards..lol) so I grabbed him again…and told him that I came all the way from Holland to see him..and he said are you Suzette?? I thought I was going to faint..neh…but I was just lost for words…so he gave me the biggest hug and said that he appreciated all my hard work that I had and still put into the fansite…and that I came over to see him.

Here are 2 quotes from my encounter in 2010 (was during his book launch of Patagonia/signing);

Now it was time for the signing of the book, he wrote something in welsh and in english in mine..as I really wanted him to..cause I just love the language…and I thanked him and we shared 3 kisses…he remembered..lol his family didn’t so he shouted…the european way…

[quote]As it was very warm in John Lewis I took my coat off, but I had so much stuff with me..that I ended up with loads of things in my hands…so I took a basket with wheels..and dropped everything in there…thought I was really smart…and way easier…so I got back to the spot where Matthew would be signing…I saw Nia talking to a few people from John Lewis. So again introduced myself..and said my hello’s. I saw Matthew’s uncle walking around so went up to him and said hello…and suddenly I saw Matt walking in….very relaxed..and he said hey suze…doing some shopping already…lol..pointing at my basket…!I said No Matt this is me walking around with my bag…ha ha ha.[/quote]
When you would like to know more about Matthew and/or read the complete encounters…you can go to the fansite.

And now ofcourse I’m watching The Americans….and let me say I really had to get used to the violence…and the spying thing….but I’m into it now….

Cheers and I hope everyone is enjoying Matthew’s acting skills…and his wits!!