Dinner for Seven is an episode of The Americans that showcases both the tension of the Jennings spy operations and the tension of their “cover” life. While wrapping up their operation against the Seong family to gain access to the top levels of the chemical weapons lab, the family also still has to deal with the Pastor Tim issue… and their FBI friend Stan crashes the party. 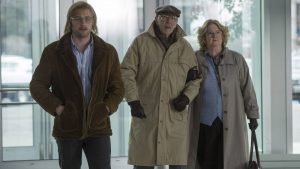 Elizabeth pays Don a visit to tell him that there sexual escapade resulted in her being pregnant. Of course Don reacts like a rat trapped in a maze, and tells her to get an abortion. Elizabeth plays her part perfectly by rushing out as upset as any one would be if that situation was real.

A few days later, Phillip, Gabriel and Theresa visit Don at work disguised as Elizabeths parents and brother. They tell Don that Elizabeth committed suicide, and it is his fault. They convince him to give them money to fly her body home for a proper burial, and while Phillip and Don go to the bank to get the money, the “Parents” get Dons passcode to the security system. The operation was a success, but it took an emotional toll on Elizabeth. 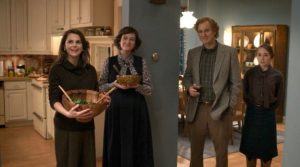 Paige stopped by the Beeman’s house looking for Henry, and instead spent some time talking with Stan’s son Matt. This scene began to show the potential of Paige to join her parents in their work as spy’s. Paige learns that Stan had dinner with Martha’s father, and relays that information back to her parents. Does she understand what she did?

Stan confides in Phillip that Agent Gaad was killed and he suspects the KGB. This seems to weigh on Phillips conscience as he later tells Elizabeth and reminds her that he put in his report that Stan had told him that Gaad was on vacation in Thailand.

Meanwhile, the Jennings invited Pastor Tim and his wife over for dinner to show that there is no hard feelings about the African incident. While preparing for dinner, Stan stops by and Henry invites him to stay for dinner. This is a little awkward, but everyone seems to make it through the dinner alright.

After dinner, Stan leaves, and Pastor Tim comments to Elizabeth that it must be odd having an FBI agent living next door. Elizabeth says “you can’t choose your neighbors” to which Pastor Tim insinuates that they have chosen their neighbors for spying purposes. Elizabeth tells him that they lived there long before Stan moved in. 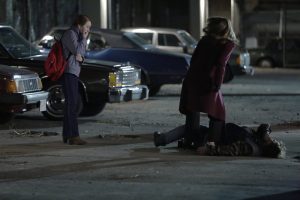 Elizabeth goes by the church to pick up Paige and speak with Pastor Tim. On the way home, they get approached by some would be assailants. Elizabeths KGB training, and protective mamma instincts kick in and she dispatches with the bad guys in front of Paige.

Overall, Dinner for Seven was a very well done episode of The Americans. We had a resolution to one mission. The continuation of the struggle to keep Pastor Tim in line, and a tightening of the stranglehold on the family. We also see Paige getting drawn into the family business in a few ways that is sure to have repercussions as the series progresses.

The Americans: A Roy Rogers in Franconia | S4-E12