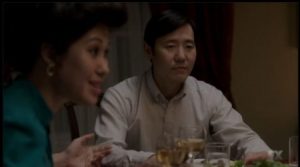 Munchkins, the 10th episode of the 4th season of The Americans really shows the precarious position the Jennings family finds themselves in as this season starts building up to its climax.

Stan agrees to have drinks with Martha’s father and coheres Agent Aderholt to join him. Martha’s dad is sure that Martha was innocent or simply manipulated by this “Clark” guy. He makes them promise to not give up searching for Martha.

Back at the Jennings house, Pastor Tim’s wife makes an unannounced visit to inform the family that Pastor Tim has gone missing in Ethiopia, and she believes they are responsible. She tells them that she has given a tape to their lawyer exposing the Jennings with orders to hand over the tape to the state department if anything happens to her. Phillip and Elizabeth try to assure her that they had nothing to do with it, but she has her doubts.

After Pastor Tim’s wife leaves, Paige shows that she is not sure of the innocence of her parents either. Although the situation is bad, this does serve to justify Phillips earlier concern that if they were to off Pastor Tim, Paige would think they did it.

Agent Gaad is enjoying his vacation in Thailand until he is confronted by some Soviet thugs. He tries to get away, but in the pursuit he ends up going through a glass door and getting some glass in his gut from which he bleeds to death. Poor Gaad. That isn’t they way I expected him to go. On a side note, Stan told Phillip that Gaad was going on vacation to Thailand a few episodes back. I wonder if Stan will start to put things together…

Paige stops by Stans looking for Henry. He isn’t there, but she stays for a minute to hand with Mathew. Mathew tells her about the secretary (Martha) at his office that was a spy, and that she disappeared. Is Paige going to put together the timeline of Phillip “loosing a client” with the disseverance of the FBI secretary?

Mathew gives Paige a ride to church where they learn that Pastor Tim is okay. He ran out of gas, and was simply lost trying to find his way back to town. This comes as a relief to everyone who throughout the episode have thought that Phillip and Elizabeth were murderous KGB spies (which they are…). They just didn’t kill Pastor Tim… yet.

Oleg and Tatianna are in bed again when Tatianna reveals that she is with the chemical weapons section of the KGB. She tells Oleg that they have operatives trying to get a sample from a company that the government has sub contracted out to. If Oleg reveals this to Stan, that may put Stan and the Jennings on a collision course. 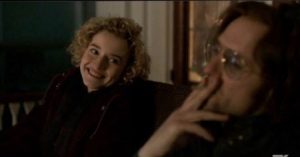 Phillip (in a rather hip disguise), takes a break from smoking some weed with Kimberly to make a swap of something in her fathers bag. Kimberly reveals to Phillip that her father is actually a CIA agent. Maybe they haven’t revealed what this operation is, or maybe I am forgetting, but I wonder if that works for or against Phillips plan?

So in this episode we had a major incident due to Phillip and Elizabeth telling Paige that they were spies (and Paiges indiscretion with that information later). We had Matthew revealing some information to Paige that Stan told him (likely in confidence), we had Tatianna revealing some info too Oleg that she should have kept to herself… And then Kimberly tells Phillip this secret about her father. Phillip tells her she should have kept the secret. It is obvious he is thinking of Paige.