Travel Agents, the 7th episode of the 4th season of The Americans, was the height of worry and stress. After Martha ran out of the safe house last week, we are left with an insane man hunt where the FBI, Phillip, and Elizabeth are all on the hunt for Martha. The truly worrisome aspect of the episode, is we are never sure if any of Martha’s pursuers are actually interested in bringing her back alive. 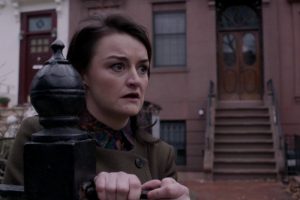 If you are reading this review of the middle of the 4th season of The Americans, I am going to assume you have some idea of what this show is about. So the name “Travel Agents” would seem to mean the episode has something to do with the Jennings cover as Travel Agents. In fact, the name Travel Agents is in reference to the KGB agents at the rezidentura that are trying to figure out how to get Martha out of the USA and over to the USSR. The episode opens with Oleg trying to plan a flight, and find a pilot and airstrip that they can use to get Martha to Cuba, and from there, safe passage to Moscow.

Meanwhile, Phillip and Elizabeth return from picking up last episodes “rat” to discover Martha has run out. Gabriel explains what happened, and they make a plan to look for her. Gabriel tells them “bring her back… but if it is in public, and she starts screaming again… you may have no choice.” Phillip is torn, and we can see that he really does have feelings for Martha. Elizabeth sees this as well.

The FBI figure out that Clark is a cover, and they go full bore on the hunt for Martha. They search every inch of Martha’s apartment (I mean every inch, in the outlets… they even have someone searching her tampons…) Agent Gaad seems extremely disheveled over this mess. When an outside agent tells Stan to push his contact with the Russians to find out if they have Martha, and he refuses. This doesn’t go over well, and Gaad’s superiors come down on him for not be able to control Stan. Glad stands up to them, but he feels his time with the bureau is nearing an end.

Martha calls he parents from a payphone in a park. The FBI has Martha’s parents phone tapped, so they listen in as she tells her parents goodbye, and they get her location. Martha walks up on to a high bridge and looks over.

We wonder who will kill Martha first, the FBI, the KGB, or herself. 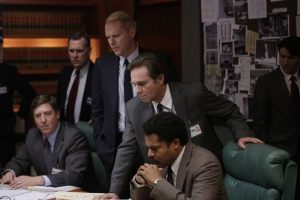 Well Martha doesn’t kill herself, she calls Phillip instead, and he talks her down. She agrees to wait for him at a trail head in a park, and he rushes out to pick her up. Elizabeth calls in to check with Phillip but he is already gone. They call center agent lady tells Elizabeth where Martha is and Elizabeth says she is close, and rushes to get there first. Is Elizabeth trying to take Martha out before Phillip can get to her?

Elizabeth gets to Martha first, and this is a tense scene. We really aren’t sure if Elizabeth is just going to kill Martha. Elizabeth approaches Martha with her hand in her pocket. Does she have a gun? Martha starts to have another freak out, and we are sure that this is Martha’s end.

Elizabeth strikes Martha in the gut, and for a second there, I though she stabbed her. But it was just one hell of a gut punch that knocks the wind out of Martha. Elizabeth explains the situation to Martha, and then takes her back to the safe house.

Back at Agent Gaad’s office, Stan comes in with a couple of sketch artist drawings. The first is of Martha… It looks nothing like her. The 2nd one is of Clark. It looks a bit more like hime, but the FBI doesn’t know that. They must assume that the sketch is as off base as the one of Martha.

Glad reveals to Stan that Martha and Clark were married. The very idea that the FBI head of counterintelligence’s secretary was married to a KGB officer is tearing away at Gaad. How could they have failed to see it? 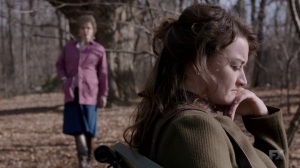 On a similar note, Stan’s son Matthew, along with the Jennings children Paige and Henry, sit at Stan’s house drinking Stan’s beer. Despite Stan’s success in discovering Martha’s deception, He has failed to catch her, he has failed to figure out that the “KGB Officer” that she married is none other then his neighbor Phillip, and he even fails to realize that the children of that KGB officer are stealing alcohol from his fridge.

The FBI makes small gains in this show, yet never see that as they take small steps forward, they are standing on a moving walkway that is going in the other direction.

As for most of this season, Alison Wright has done an outstanding job as Martha. Her performance is striking and powerful. Although in this episode, Matthew Rhys gave such a powerful performance throughout, but especially when he explained to Martha that she was to go to Russia to start a new life… without him. His expression shows so much pain that we wish he would have just lied to her to save us all from having to experience that.

Not to be left out, Richard Thomas played Agent Gaad with a subtle perfection in this weeks episode. Here is a man that knows he has been duped, and that this deception is likely career ending. He thinks he has failed at his job, and failed his country. You can see the defeat in him. It is an extremely powerful performance.

The Americans 4th season has been stealer so far with outstanding writing, beautiful cinematography, and flawless editing that keeps of level of tension that is not common on television. But the performances are what really push this show forward, and the 7th episode of the season, Travel Agents, puts those performances front and center.