There are moments in television history that stick with you. I will never forget when MASH had it’s series finale, or Cheers, or Night Court. I will always remember the first night of Star Trek: The Next Generation. 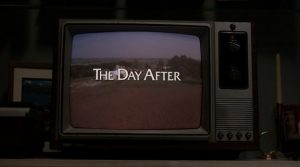 For many people, The Day After was one of those television moments. I don’t remember it at all, but many people do. The Day After was the tale of, what we in the 1980’s thought was the inevitable, nuclear war between the USA and the USSR. It is fitting that it plays such a large part in this episode of The Americans that shares it’s name.

The episode opens with the Jennings still on “break”. Phillip is teaching Paige to drive, while Elizabeth is still working the Korean woman. Nothing terribly exciting.

After the opening credits, Phillip is playing racquetball with Stan. Phillip tells Stan about he has been getting plenty of rest since he lost some clients a few months ago. Stan tells Phillip about the new pain in the ass boss at work. These outings with Stan provide great intel, don’t they… 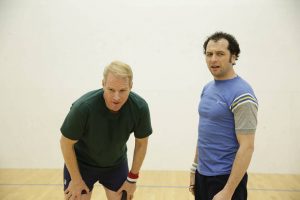 Phillip is home when Elizabeth returns. She tells him there was a signal from William. They wonder why William would signal them without going through Gabriel, but decide to meet with him anyway.

Phillip shows up in a jet black wig that looks like it was made by Trumps wig guy. William comments that this might be Phillips best look yet. Phillip tells William that Martha is in Moscow. William tells Phillip about a new pathogen they have where he works. It is bad, and he doesn’t have access to it. He is not sure if he should hand it over to the KGB, so he thought he would talk to Phillip first. Phillip tells William they are still working on getting him access. He will talk to him soon.

The show seems to have a profound effect on most of the viewers. It seems to make Phillip question what they are doing, and strengthens Elizabeths resolve. 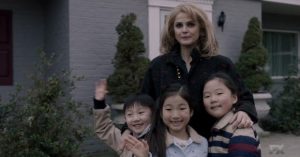 The next day, Elizabeth babysits for Young Hee and Don when they go out of town so she can go through the house to find some dirt on Don. It is beginning to look like the operation with the Korean family is because Don has the access codes William needs… but I could be wrong.

Paige and Phillip are doing the dishes, and it is clear that Paige is upset about The Day After.

When Elizabeth returns from finding nothing on Don, Phillip again suggests they don’t tell the Center about Williams findings so that she doesn’t have to hurt Young Hee. Phillip knows that Elizabeth likes her, and he suggests that the Center can find another way. However, Elizabeth is determined to do her job.

Phillip meets with William to tell him they are going to go ahead with the operation. Phillips thinks that William needs to tell Gabriel about it so it no one suspects that they might not have revealed the contagion to the Soviets. 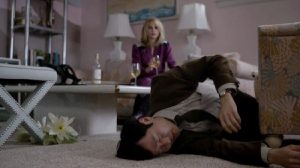 Meanwhile, Elizabeth calls Don under false pretenses. She is trying to honey trap him. It doesn’t work out to well, so she drugs him, and makes him think he did.

This scene was difficult. It is acceptable when there is “spy vs spy” stuff going on. It is acceptable when people of low moral caliber get caught up in bad things. But Don seems like a good man. The more this scene went on, the more I wanted to see Elizabeth get caught. Maybe they will show us in later episodes that Don is a bad guy that deserves this, but right now, it is hard to root for the Jennings.

Meanwhile, Phillip and Paige head off to a church event with Pastor Tim. Pastor Tim is concerned about Paige. He thinks she is unhappy, so he wants to have a sit down with the Jennings family when he returns from doing missionary work in Ethiopia.

If Pastor Tim makes it home from Ethiopia, I will be surprised. This really seems like a great way to get him out of the picture without raising suspicions. Lot’s of bad things happen in Africa. 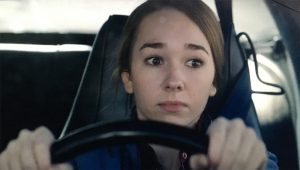 Taking into consideration what Pastor Tim said about Paige’s happiness, Phillip decides that her next driving lesson should be in the Camaro.

“Paige, honey, you need to blink. I promise you, it will be better if you blink.”

When Elizabeth returns from her dealings with Don, Paige excitedly runs to tell her about her experience driving the Camaro. Elizabeth, however is upset about what she did, and pretends to have a headache. This ruins Paige’s happiness also.

The Americans has alway run a dangerous line in making the shows protagonists Soviet spies. Episodes like The Day After remind us that these are, indeed, the bad guys.