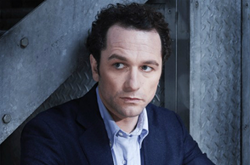 It’s been 150 years since a group of Welsh immigrants travelled to South America to begin a new life. To mark the mammoth journey they undertook, Welsh celebrities including Hollywood star Matthew Rhys and BBC weather presenters Sian Lloyd and Derek Brockway, launched a charity trek to follow in their footsteps that will take place next year.

The Americans actor Rhys says he is hoping to join the 11-day hike to raise funds for Cardiff’s Velindre Cancer Care centre if his filming schedule allows him the time off. Mathew Rhys plays husband to rumored girlfriend Keri Russell. The TV spy series has been renewed for a third season which will air early next year.

The Velindre trekkers will also take part in a special walk with the riflemen as they trek up Craig Goch to the point from which Cwm Hyfryd was first seen by the settlers exactly 150 years before.

The launch at the Mimosa restaurant in Cardiff Bay comes 149 years to the day when the Mimosa ship arrived in South America from Wales.

Among those attending will be keen walker Brockway who has many reasons for supporting the cause. He exclaimed, “I know quite a few people who have had cancer and a colleague of mine has been having treatment at Velindre, they do such a fantastic job. He told, “So doing this walk is a great way to support them.”

But while the presenter of BBC Wales’ Weatherman Walking is a keen hiker, he admits he’s a little awed by the challenge, which will involve walking for up to 11 hours a day saying, “It’s not going to be a walk in the park but it will be a great experience as I’ve always been intrigued by Patagonia and it’s a way to raise money for such a great cause,” he added.

Walking alongside him will be Rachael Barlow-Maguire, who received treatment for breast cancer at Velindre. She’s already climbed Killimanjaro for the charity and in October will be taking part in the Cardiff Half Marathon to raise further funds. She said,  “I’m always looking at ways to raise money for Velindre and my husband, Andrew, is doing a bike ride in Boston for them this year so I want to do something next year. She also added,  “While it will be fascinating to discover the Welsh connections in Patagonia, for me, it’s all about raising as much money as possible for Velindre.”  For a  42-year-old mother of two, she admitted the Kilimanjaro climb was “horrendous”.

“It was really difficult but the camaraderie within the group was amazing. I can’t quite believe that I did it,” she said.

The Americans  actor Rhys, who is originally from Cardiff but now based in Los Angeles, has already travelled extensively in Patagonia, completing a month-long journey on horseback from the Atlantic to the Andes.

His co-riders were all descendants of the 30 Welsh-speakers who had made the same gruelling journey more than a century before.

Rhys said, “As Velindre’s overseas patron I’m delighted that the latest fundraising trek will be to Patagonia, an area that I know very well and is very close to my heart.”

“I’m grateful that I’ve had the chance to develop a strong affinity with Patagonia and its amazing people, it’s just one of those places. Once you have been there, it gets under your skin, and I would highly recommend trekking Patagonia and raising funds for Velindre at the same time.”

A total of 50 people will join the trek and they will each need to raise £6,000 for Velindre.