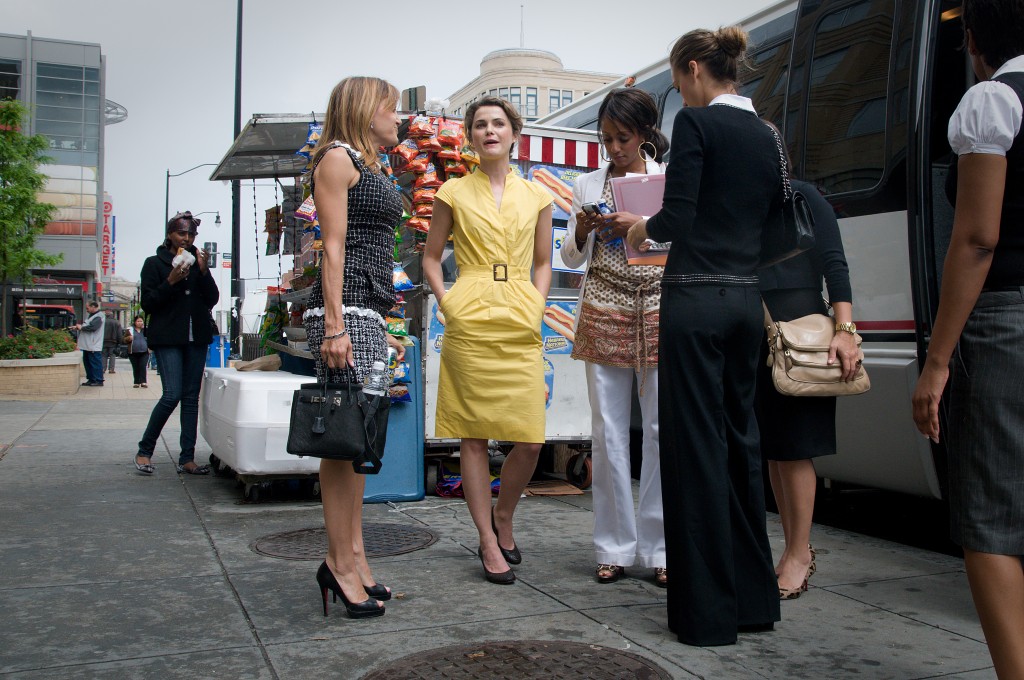 Keri Russell has been seen on the streets of New York donning a wig and wearing a costume while filming for the 2nd season of The Americans. She had a brunette wig curled at the bangs all the way to the sides. It was barely touching her shoulders because she was wearing layers upon layers of clothes. She wore a knit top, a brown speckled suit, and a padded navy jacket. She also wore very limited makeup which exposed her near perfect skin.

Matthew Rhys was also there again wearing his infamous wigs. He also had brown hair, some bangs on the front with a semi mullet for his back. It’s more like a bowl cut but a bit longer at the back. He was wearing a striped white shirt with a blue neck tie, cream khakis, and a brown blazer.

The most interesting thing from the pictures that we can’t legally show you is that the pair was wearing color blue IDs that had a small map of America (like an icon) and the letters SBN. Based from a quick Google search of “SBN” and “SBN America” it can stand for South Bend Airport, Society for Behavioral Neuroendocrinology, or South Broadcasting Network.

I don’t know how to interpret this. Is the show going to tackle about Behavioral Neuroendocrinology? Or are they posing as South Bend Airport employees? Maybe working for the South Broadcasting Network? Or is just random letters that I’m putting too much thought into?

Anyway, the filming for the 2nd season of The Americans is still commencing and they are slated to continue airing on February of next year according to FX. Just a couple of months people, and we’ll see action, drama, espionage, and a bunch of funky wigs and clothes from the 1980s.