Knowing What The Cold War Is And Why It Took Place:

Inception of the term “Cold War” was in 1945. It was used by writer George Orwell in an essay of his. The cold war was named so because between the USA and the USSR there was hardly any direct combat. They were rather heading towards mutually assured destruction-this is a strategy which involves two adversaries using weapons of mass destruction, assuring inevitable destruction for both sides and victory for none.

Easier to understand if you’re an economics student and are familiar with Nash Equilibrium or prisoner’s dilemma. The war nearly followed those concepts. It is when your gain or loss depends on another person’s decision, alongside your own. Let me just give you a little demonstration: USA didn’t know whether Russia would attack or not, so if USA attacks and Russia doesn’t then it’s a win for the US. However, if USA decided not to attack but Russia did then USA would be annihilated.

So, each country competently created nuclear weapons to threaten the other one away. In case either one of the countries decided to attack using their high-yield weapons then the other one wouldn’t just stand empty handed. This would ignite a war and cause massive wipe out on both sides allowing neither country to actually win.

Due to the reasons I’ve explained in the previous paragraphs, both USA and Russia found it their first priority to keep themselves as secure as possible by creation of nuclear arms. This resulted in a contest, known as The Nuclear Arms Race.

USA exploded the H-bomb in 1952. The bomb was smaller but 2500 times more powerful than the Hiroshima which exploded in 1945. This event eventually led to the Russians producing an H-bomb in 1953. Suddenly, the world wasn’t safe place anymore.

By 1961 enough bombs were created by both the countries to destroy the entire world.

Estimation was made by the American Intelligence, that 20 million Americans would die and 22 million would be injured if the Russian missile attack was ever to happen.

NATO felt outnumbered in the west, having fewer troops, tanks, artilleries and planes to carry missiles but had a greater number of ICBMs which kept them hopeful.

Between 1945 and 1991, when the Cold War persisted, the world had been divided into two halves led by the two superpowers. The Western bloc was led by USA with NATO and the Eastern bloc led by the Soviet Union with the Warsaw Pact.

Historians disagree on when the Cold War was resolved but most believe it ended when the USSR collapsed in 1991. Given the possible results of the war, both of the countries realized it would be best if they resolved their issues and avoided the war. 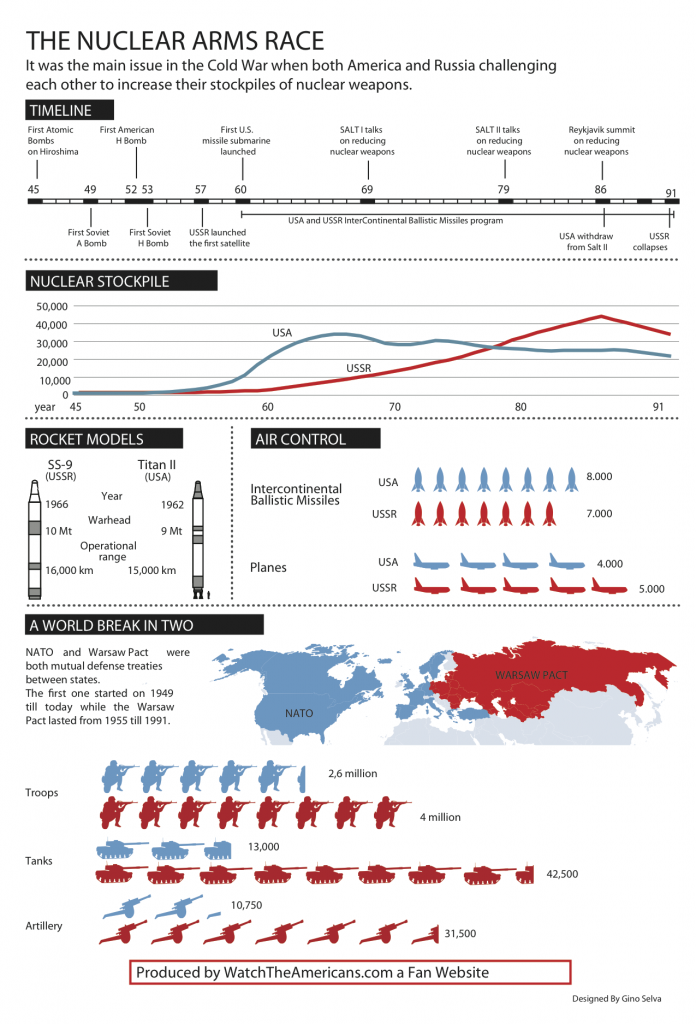 Infographic on the nuclear arms race between USA and USSR

What It's Like to Meet Phillip Jennings…Uhhh Matthew Rhys!