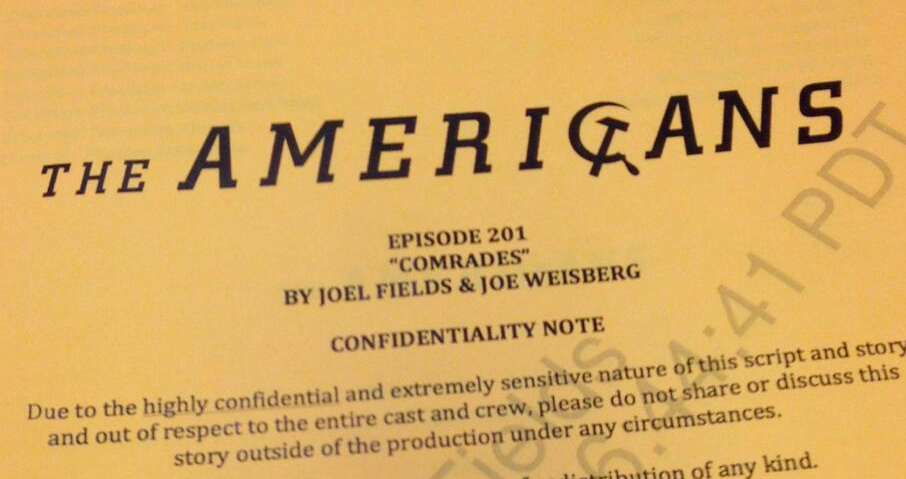 While we’re patiently/excruciatingly waiting for February of next year (ugh) let’s indulge ourselves with news on the set of The Americans.

The Americans released a set photo of Lev Gorn (Arkady) and Annet Mahendru (Nina) sitting with a back ground of a painting of Vladimir Lenin. Who’s Vladimir Lenin? And how will this painting affect the show? Is it just a piece on the set? Am I over-thinking things? I probably am.

A bit of info about Vladimir Lenin: He is considered the father of the USSR or the Soviet Union. The Soviet Union grew after the 1917Bolshevik Revolution under Lenin. The Bolshevik party was then renamed as the Communist Party that seized control of the Russian government and retained it through a civil war that continued until 1920. My guess is they’re filming a scene on the Russian embassy, or are they actually in Russia? Guess we’ll just have to find out.

Anyway, here are some news from Joel Fields’s Twitter account @joeweisberg, you can see a lot of cool pictures on this season’s set like old typewriters and gadgets that they’ll use for the show. Two pictures of scripts have been posted so we already know the titles for the first and second episode of season 2, “Comrades” and “Cardinal”.

“Comrades” can be related with the Contras and the Nicaraguan Revolution. Aimee Carrero  has joined the 2nd season of The Americans and her role will be a rebel so it might be related. “Cardinal” can be about a new character, or a trip to the church. Or a combination of both? A spy with a cover of a priest? How bad ass would that be?

You can also follow Joel Fields on Instagram (joel_fields) and see pictures of the set for the 2nd season.  And make sure that you pop in frequently in this site for the newest and latest news about The Americans.